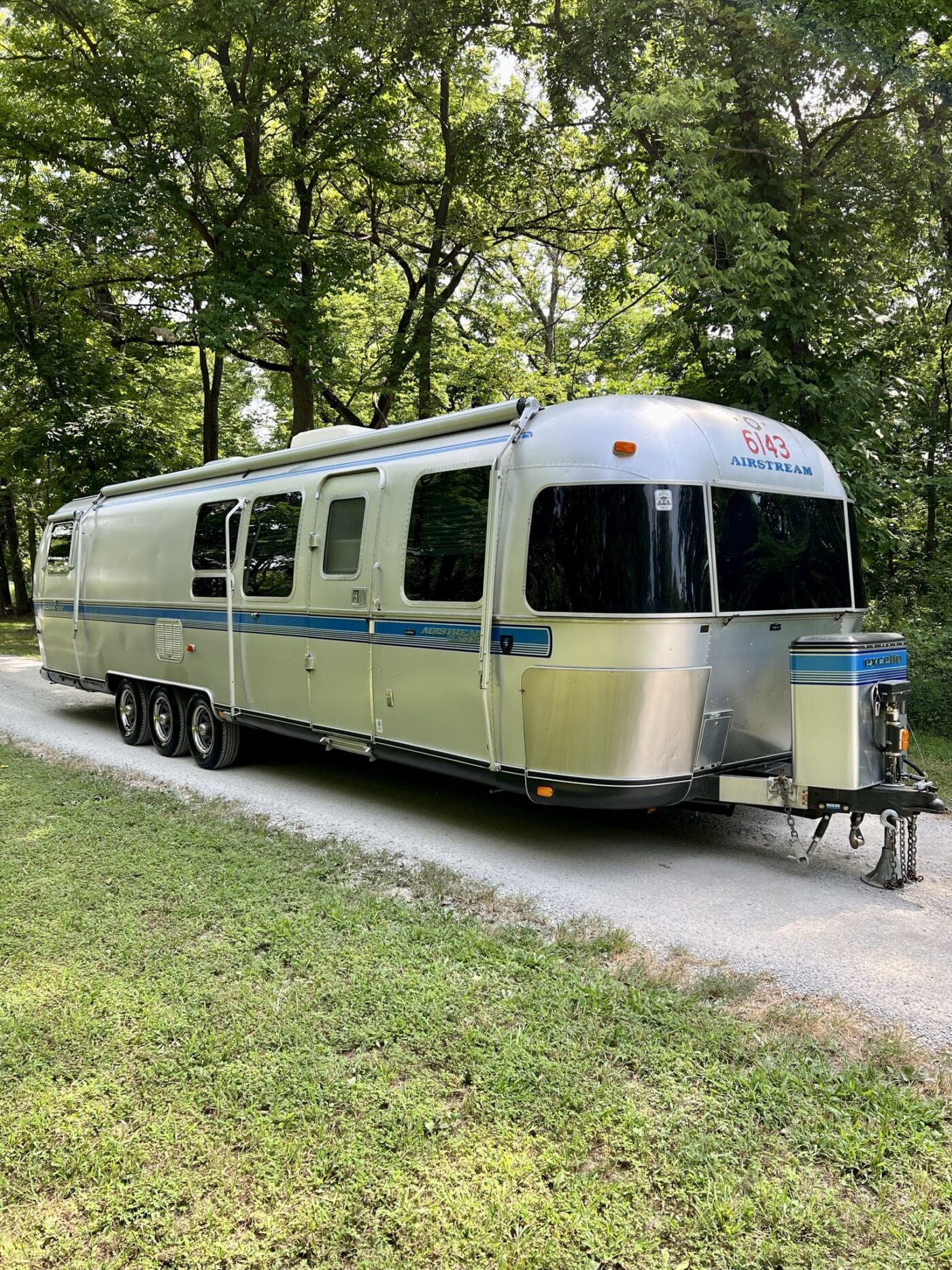 It’s time to let our favorite camper of all time go! We bought this from the original owner in 2017. It was their 3rd airstream over the years (and the first one they bought new) but due to age/health they had to part with it. We have cherished this camper and have traveled all across the US in it. We have had a blast with Ellenor (the campers name), but the next chapter of our lives doesn’t involve a ton of camping.

We use this camper. As did the previous owners. I say this because I don’t want anyone thinking this is a pristine/remodeled unit without any quirks. It’s in great shape for its age and is camp-ready but requires love and upkeep year to year.

We replaced the axles shortly after the purchase and added harmonic balancers to each wheel (I think that’s what they are called??). The Maxim tires have about 2500 miles on them, and it has a full spare. It also comes with a full TMPS system for all 6 tires and the tow vehicle.

We added a new fantastic fan to the bathroom and replaced the shower wand. The toilet has a wand for cleaning that has also been replaced due to it leaking.

The two original propane tanks have been re-certified and the propane lines at the tanks are newer.

Intake and exhaust fans were added to the fridge cavity along with a controller and over temp/safety device that shuts off the gas to the fridge if there are issues. The fridge works amazingly well and runs off of shore power/generator or propane. There is also a light and circulation fan inside the fridge.

The AC/heat pump is a Dometic Penguin and works great. We are including a Micro Air that we purchased last year but have not had a chance to install. We clean the coils each season and have never had any issues. The furnace also works great.

The water heater was replaced by the previous owners at some point. So, it’s older, but works great. We clean it/service it annually and replace the electrolysis rod. Fires right up and is plenty of water for a couple showers. It also recovers very quickly.

Every light in the trailer (inside and out including running lights) have been replaced with LEDs and I will include a complete set of extras.

We replaced the water pump with a better pump as the old one was loud. And added an expansion tank that holds a little pressure in the lines. Great water pressure from the pump/tank and will run for a few seconds without the pump coming on which is nice.

The kitchen faucet has been replaced and has an original water filter system under the counter. We added a nice shelf under the kitchen sink that is removable for access purposes.

The microwave/convection oven works well although we didn’t use it much. And the stove burners all work great. The igniter on the stove has never worked, we just use a lighter.

We added a small HD TV to the bedroom. This is mounted on the wall and plugs directly into the antenna jack and 12v outlet. We also added a shelf just below the TV for a speaker (included). The TV is 12 volt and has a built in DVD player. It’s a cool little set up. The roof top antenna is a crank-up that can be turned for better reception. We just replaced the entire antenna due to the crank linkage breaking. The antenna pulls in more over the air channels than our house.

The bedroom has a thermostatically controlled fantastic fan, as does the living room. Both fans work great and can blow in or out.

The floor covering in the main area was replaced by the previous owners. They installed a parquet style wood floor. It’s in OK shape. No major issues, just not new looking. They left the carpet in the hall and bedroom which is showing use. It’s not bad… but we want you to know what you are getting.

The ceiling covering throughout is an adhesive backed vinyl. Like many airstreams, this has sagged over the years. The previous owners as well as ourselves have added additional strips to the ceiling to keep it up. They look good and do a good job keeping the vinyl in place. However, the ceiling is not perfect and will need attention from time to time.

There is a slide out trash can in the kitchen concealed in a cabinet. The track broke on the slide portion of this and will need to be repaired. We didn’t fix it as it’s just as easy to use without sliding out.

All of the windows with the exception of the front-end window have day/night shades. We have the one for the front window but the stings broke. All the windows work perfectly and all the glass is intact and not cracked.

The upholstery is original and it great condition. The dinette folds down to a bed. And the jack-knife sofa also converts to a bed.

The fresh water, grey, and black tanks don’t leak and the valves work as they should. We do a full flush on the black tank after each trip. Like many RV’s and travel trailers, the black and grey tank sensors are questionable. They work, but sometimes read full when I know it’s empty. We just use them as a guide and over the years have learned when we need to drain the tanks.

We also fixed the “door sag” on the front door shortly after we purchased the trailer. In essence the hinge plates were coming loose causing the door to not close properly. After a ton of research we accessed the hinge plates and added reinforcing hardware. The door opens and closes perfectly.

There are no leaks in this trailer. I have never had a leak and routinely inspect for issues. There are no soft spots in the floors. Not around the edges, not in the back or front, not anywhere. The subfloor is very solid.

All the awnings are in great shape and work properly. The rig looks great when you have them all out!

Additionally, in a bone head move on my part, I got too close while moving a mower that had a weed eater strapped to it… and subsequently added a scratch/dent to the character. Again, cosmetic only.

The clear coat is peeling on the exterior in spots, which is normal for the age. We store the camper indoors, in climate control.

Includes a weight distribution hitch with anti sway. This was the hitch the previous owners purchased with the trailer. It works great and is what we use.

There is a lot to list, and I’m sure I forgot something. Look at the pictures and let me know if you have any questions.

Everything inside the trailer is new (towels , sheets, rugs, etc) and is included if you want it. We will also include most everything you need to set up and camp including some extra parts, specialty tools, and leveling blocks/wedges. We have a 3 ring binder with all the manuals, receipts, diagrams, etc. I also drafted a complete procedure on how to winterize that will be included.

Showings will take place by appointment only at our storage facility on a first come first serve basis. The unit will be plugged in and all systems available for testing.

This Airstream was recently marked sold.
2 People viewing this Airstream.
Report this listing