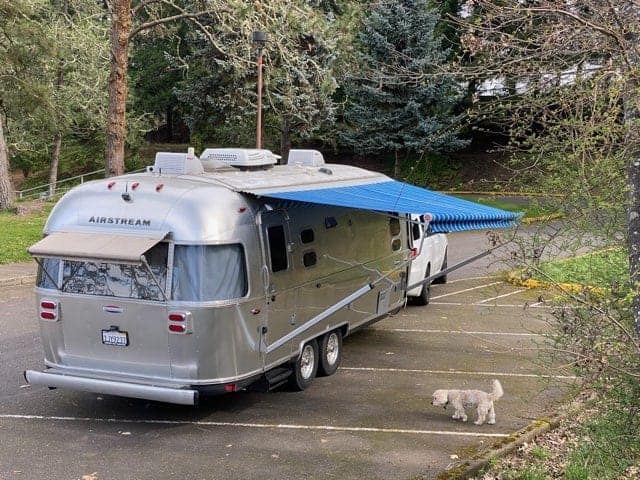 A cold, grey, overcast sky hung low over The City, as we made our way back, chilled to the bone, to the New Jersey side of the river, where our 25′ FBT International Serenity – ‘Tilly’ – sat almost solitary on an icy, wind swept parking lot that had been rebranded as Liberty Harbor RV Park, “An urban camping experience . . . Just 15 minutes from New York City”. It was a few weeks before Christmas, and we had spent the day enjoying the sights and sounds of the Holidays arrayed along the concrete corridors of midtown Manhattan. Now, shivering in our scarves and parkas as night encroached, we slipped the keys into the locks and tugged open the door to be greeted by the enthusiastic barks and howls of our two small pooches. We were home! The warm embrace of our Airstream was a welcome refuge from the deepening gloom outside its aluminum walls.

This is what Tilly came to represent as we towed her around the United States for thirteen months, while waiting for a home to be built in Eugene, OR: she was a refuge from the storm; a home away from home; a center for exploration and adventure; a shelter from the pandemic; a gourmet kitchen; a refreshing shower on a hot day; a quiet place to read a book, or watch a movie; a great night’s sleep; and much more.

Refitted with drawers under one of the twin beds, and fixed shelves in a wardrobe above the other, complimenting the cupboards above the beds and the main wardrobe next to the shower, she kept our clothes organized for the duration of the trip. Ample drawers, cupboards and cabinets in the kitchen, dining area, and under the bench seats, stored all of the cooking gear and appliances we needed to turn out a fabulous meal when called upon to do so. That usually happened when a friend or relative would join us somewhere along the way, and stay for a few nights, or even a week or more. It was especially during those longer stays that we appreciated the convertibility of the front couch into a pull out bed.

What we couldn’t store in Tilly, we stashed away in, or on top of, our TV, a 2019 Durango R/T, powered by a 5.7 litre Hemi. Folding bikes, and helmets, inflatable canoes, paddles and life jackets, walking sticks, etc – all our adventuring paraphernalia were accessible and easily transportable to whatever destination we might wish to explore.

It was a glorious year and then some, but as the pandemic shut down more and more of the places to which we hoped to travel, we decided it was time to return to Eugene, rather than spend another year on the road. We loved what we saw of this magnificent country of ours: its mighty rivers, towering mountains, rugged coast lines, sweeping pasture lands and plains. From the Everglades of Florida to the snow capped peaks of the Tetons, from the muted escarpments of the Great Southwest to the brilliant colors of a New England autumn, we were treated to much of the splendor these United States have to offer.

Early in our trip we had stopped at Can Am RV in London, Ontario, to let Andy Thompson’s hitch specialists optimize our towing assembly. The work they did improved our towing experience substantially. The TV had a tighter grip on Tilly, and we were no longer being buffeted by the passing of eighteen wheelers as we had been before. However, as the second half of my seventh decade arrived, one issue became increasingly apparent: I was not eager to continue wrestling with the load leveling hitch any longer. A failure of the hitch jack on the way back to Eugene drove home the point that it was time to consider a motorhome as our next RV. My wife and I talked about it, and, despite the many warm memories associated with her, we decided we were ready to put Tilly up for sale.

Having made that decision, we took her in for a complete checkup and annual service at the local Airstream dealer – Sutton RV – here in Eugene. While she was in great condition considering the thirteen months she’d been on the road, we found that the batteries had been sufficiently depleted that we replaced them with two brand new Interstate SRM-24s. That along with four new Goodyear Endurance tires replaced in Tampa, FL in January of last year, and the new PARALLAX Electronic Power Converter installed at Nashua Airstream in New Hampshire last July, were the notable upgrades made to the coach over the course of our trip.

Tilly is in great shape,. and totally ready to undertake new adventures and forge new memories for her next owner.